Since the reopening of Museum De Lakenhal, it is home again: The Last Judgment by Lucas van Leyden, the groundbreaking triptych. This masterpiece of northern Renaissance is the source of inspiration for Leiden Chamber Choir’s program Triptiek: three parts, each with its own character, forming a whole together.

With our musical triptych we took our audience to three periods and three regions: Italian Renaissance, British Romanticism and modern Scandinavian choral music. From those three perspectives Triptiek told the story of mankind’s relationship with love, death and nature.

In the intimate atmosphere of the Lokhorstkerk, our listeners experienced how composers bring universal themes to sound in their own way in different periods – from an Italian madrigal about a love-sick man cooling his heart under the stars to the cries of Swedish fishermen wives who finally see their men return from the sea. This triptych offers a wide view on what a-cappella choir music has to offer, in a varied program where there is always something new to discover.

Heritage Open Days 2019 took place across the Netherlands during 14-15 September. Thousands of monuments, recognizable by the Open Monumentendag flag, opened their doors to the public for free. On this occasion, the Leids Kamerkoor was invited to sing in Academiegebouw, Leiden. We performed pieces from our next concert in November among pieces from our previous repertoire. 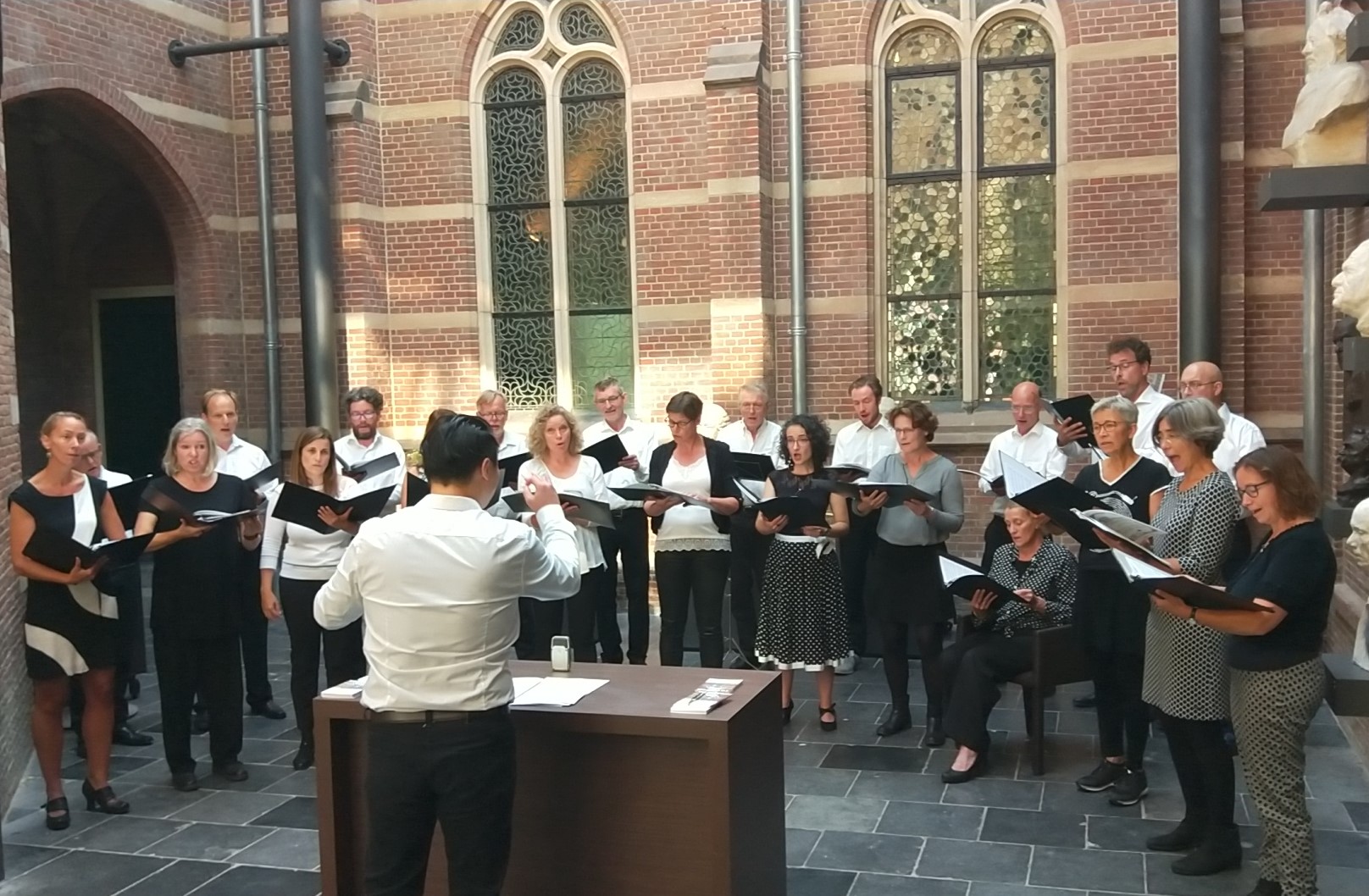 Rising from a dark cool pond, she found the light and opened gladly her golden heart. She now rests peacefully on the water, thinking …

This image of a water lily comes from a poem of Frederik van Eeden and put to music by Herman Strategier. It was the essence of our summer concert with the theme reflection. A contemplative programme and the first major concert of Leiden Chamber Choir with our new director Dody Soetanto.

Quatre Motets pour un temps de pénitence by Francis Poulenc formed the heart of our programme. These motets are based on Biblical texts and are about penitence. Before penitence, there is always reflection. Religious and secular works from different periods form the leaves around this golden heart. All of them allow reflections in their own way.

Miserere by Alessandro Scarlatti and O vos omnes are two sacred works from renaissance. We sang the latter in two different adaptations: by Tomás Luis de Victoria and Carlo Gesualdo. They are accompanied by religious music by contemporary composers: t De profundis by the Belgian composer Vic Nees , a supplication from man to God, literally ‘from the deep’.

Water is like a mirror that invites us to take a better look at ourselves. It is an ever returning image in poetic texts of secular music like The Blue Bird by Charles Villiers Stanford. Water is also the source of our lives. It is for a reason that we sang Edward Elgar’s Death on the hills : ‘There, let the old drink water.’

From the contemporary composer Eric Whitacre we sang two contemplative works: Water Night en Go, Lovely Rose. His contemporary Morten Lauridsen builds a bridge between works fromed different periods of our concert with Ov’è, Lass’, Il Bel Viso?. He was inspired by the secular madrigals of Monteverdi and Gesualdo.

Reflection is the basis of being better tomorrow than today. That wasa nice thought to start the summer with, a time that invites us to think about life and dreams. Apart from that, Reflection was just a delightful concert with beautiful music to enjoy.

On Saturday 25 May, we participated in the Chamber Choir Festival in Hoorn. We did not only perform ourselves, but there was also plenty of opportunity to listen to the other participating chamber choirs. Very educational and fun! We participated in the workshops for singers and conductors led by Michel Meijer and Jos van Veldhoven. During these workshops we focused on three beautiful works, which we performed in the evening in the final presentation in the Oosterkerk.

This concert took place as a part of the activities organized by the ecclesiastical congregation during the Silent or Good Week (the week before Easter).

Bach composed the cantata in his third annual cycle for the Third Sunday after Epiphany.The prescribed readings for the Sunday were taken from the Epistle to the Romans, rules for life (Romans 12:17–21), and from the Gospel of Matthew, the healing of a leper (Matthew 8:1–13). The cantata text was written by Salomon Franck, who was Bach’s librettist when they both worked for the ducal court in Weimar. Franck published it in Evangelisches Andachts-Opffer in 1715, whereas Bach composed the music much later. Ihr, die ihr euch von Christo nennet, BWV 164, is a comparable example of Bach turning to a text by Franck.

The closing chorale “Was mein Gott will, das g’scheh allzeit” was written by Albert, Duke of Prussia in 1547. The chorale theme (Zahn 7568) by Claudin de Sermisy first appeared in print in the collection of secular songs Trente et quatre chansons in 1528. Bach had used the chorale before as the base for his chorale cantata Was mein Gott will, das g’scheh allzeit, BWV 111, composed for the same occasion in 1725.

Bach first performed the cantata on 27 January 1726.He later used the opening chorus for the Gloria of his Missa in G minor, BWV 235.

Our big anniversary concert took place in November. We performed Rossini’s Petite Messe Solennelle twice. A very challenging piece – “the work is more swirling than contemplative and demands endurance and virtuosity of choir and soloists that are less common in liturgical music”, so that we didn’t have time to get bored in the second half of our lustrum year.

With special thanks to our sponsors:
Fonds 1818
VSB Fonds

Summer Concert: And There Was a Great Calm

2018 year marks the 100th anniversary of the end of the First World War – a war that changed the world. Convinced that they were fighting for a worthy cause and would return home victorious after a short battle, soldiers departed enthusiastically for the front. But there were no winners in this war, only losers. The First World War claimed millions of lives. Empires and kingdoms disappeared. Families and communities were disrupted. All that remained was a feeling of utter futility.

On 17th June, the Leids Kamerkoor gave a concert entitled ‘And There Was a Great Calm’. With this concert, we not only wanted to commemorate, through the consoling beauty of music, those lost in this terrible war, but also to cherish the precious happiness of living in peace and freedom.

Top music in top locations! On 21st May, Whit Monday, the Leids Kamerkoor was invited to sing in the 10th edition of the Leidse Hofjesconcerten: a festival where the Leiden audience can enjoy a variety of artists and music styles in the beautiful ambience of more than twenty Leiden courtyards (hofjes). Beautiful locations throughout the city – covered and in the open air – where performances take place.

We sang pieces from our summer concert And There Was a Great Calm.

For information and the full programme, visit the official website of the Leidse Hofjesconcerten.

Heritage Open Days 2017 took place across the Netherlands during a weekend in September. Thousands of monuments, recognisable by the Open Monumentendag flag, opened their doors to the public for free. On this occasion, the Leids Kamerkoor was invited to sing in Leiden. We performed excerpts from the Cycles Poétiques concert – poems set as musical miniatures by composers like Britten, Hindemith and Lauridsen.

See the official Open Heritage Days website for more information about the event.

The bouquet that Benjamin Britten sent his friends Leonard and Dorothy Elmhirst in 1950 for their 25th anniversary will never wither.  He composed the “Five Flower Songs” song cycle specially for them.

These flower songs were at the heart of the Leids Kamerkoor’s “Cycles Poétiques” summer programme, along with some other 20th and 21st century song cycles.

The medieval pilgrim songs from the Llibre Vermell de Montserrat provided a wonderful complement to all this modern music.

Winter Concert 2017: from Dusk to Light

In the bleak midwinter, as daytime slowly lengthened, the Leids Kamerkoor performed its “from Dusk to Light” programme. The serene, timeless sounds of Hildegard von Bingen, soothing polyphony by Palestrina and Lassus. But also contemporary sounds of Gjeilo, Pärt and Whitacre.

Heritage Open Days 2016 took place across the Netherlands during the weekend of 10th-11th September. Thousands of monuments, recognisable by the Open Monumentendag flag, opened their doors to the public for free. On this occasion, the Leids Kamerkoor was invited to sing in the monumental Hooglandse Kerk in Leiden.

On Sunday 26th of June we gave a concert at the Lokhorstkerk, titled ‘Rise Up, my Love’. Music about love, and what surrounds it…

Varied music from this, last, and also the 16th, century. A text from the biblical Song of Songs set the tone for the first half. An exuberant opening with strident rhythm. The ‘Three Flower Songs ” then challenged with its many triplets. Just before the break, some renaissance music with “Weep, O Mine Eyes” by John Bennett, which we sang by heart. During the break the audience could admire works of art by some of our choir members.

After the break we sang – again by heart – more renaissance music by Nicolas Gombert and Josquin Desprez, followed by a contemporary piece “Cantilene ‘, a “landscape of sound” composed by our conductor Jeroen Spitteler. Singing, we drifted to random spots in the church, transforming from the 16th into the 21st century.

After the atmospheric ‘Hey, góry z, z góry!’ from ‘Five Kurpian Songs’ by Górecki, we performed Francis Poulenc’s “Chansons Françaises”. Dutch translations of the text were read out by Jeroen and Heidi, respectively the conductor and the author of these fitting translations.

The audience was enthusiastic, which was not only reflected by their applause but also their smiling faces. Members of the choir shared a private joke while bowing to the count of “sinaasappelkastjes” …